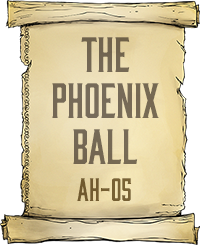 You’ve had a rather impossible time putting a stop to the phoenix terrorizing the countryside and covering the duchy of Brisbane in flames. You’ve tried killing her, but the problem with phoenixes is that they just keep coming back. That’s why you’ve come to Ashrelene-Lothgarm, the forest-covered mountain kingdom with a reputation for solving big problems, IF the royal council can be convinced to persuade the king to take action.